The Winooski River begins in the town of Cabot and flows 90 miles to Lake Champlain in Colchester. The watershed drains approximately 1,080 square miles in central Vermont, encompassing all of Washington County, about half of Chittenden County, and portions of Lamoille and Orange Counties. The Winooski River is the largest tributary watershed to Lake Champlain. It includes almost 10% of the land area of Vermont. 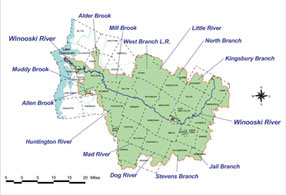 Land Cover and Land Use

Based on data from the 2011 National Land Cover Database, approximately 77% of the watershed is forested, 10% is in agriculture and 8% is considered developed land which includes rural roads and urban and built up land. Water accounts for 1% of the total acreage, and the remaining 4% is in miscellaneous land uses such as gravel pits, wetlands, and old meadow. Approximately 75,600 acres or 11% of the 690,000-acre watershed are owned by the State of Vermont and managed by the Agency of Natural Resources. The Federal government owns 12,900 acres of land in the watershed. Since 1982, the percentage of land in agriculture has gone from 16% to 10% and the percentage of developed land has increased from 6% to 8%. The makeup of developed land in the watershed that is dedicated to residential use ranges between 70 and 80 percent. Commercial/industrial use ranges between 15 and 20 percent. 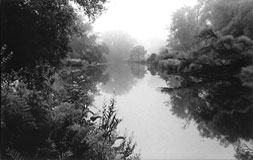 The river and tributaries from the head to Montpelier are mostly narrow and steep with heavily timbered valleys. Below Montpelier, the river has a relatively consistent gradient with fertile open land well suited for cultivation except for a few steep gorges. The Middlesex, Bolton and Winooski gorges facilitate the harnessing of hydropower and have attracted mills and the development of towns dating to the late 1700s.