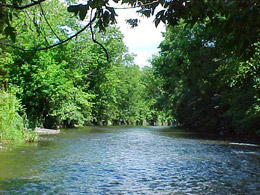 Along the banks, silver maple and black willow grow, while further back there will be green ash, eastern cottonwood, boxelder, red maple, and American elm. Most of the time, species will grow where they can compete best. Although a particular type of tree might “prefer” to live in middle-land, well drained soils, it might not be able to survive there because it would not be able to compete with other tree species. The trees mentioned above have consequently learned to survive in moist soils that occasionally get flooded by the river.

The trees and shrubs along the river banks help protect the land from erosion. Especially important during floods, these plant species hold on to the soil, helping to prevent the banks from washing away. Speckled alder, a thick shrub that grows on the banks, is one particularly important species serving this function. Bank vegetation also provides habitat for wildlife.

Other lower-lying species include buttonbush and small willows. Buttonbush can be identified from the clusters of small white blossoms that form ball-like heads an inch in diameter. Willows, with their tough, vital roots and the readiness of their broken branches to throw new shoots, provide an excellent cover to hold river banks from eroding. In areas of slow moving water, bull rush, sedges, wild rice, and burreed may be found as well as river grape, the most common wild grape of Vermont. The river grape will grow to any height in order to reach sunlight and bears abundant fruit.

There are also several members of the viburnum family that can be found along the river. The toothed arrow-wood can be distinguished by its relatively large size (five to ten feet) and smooth branches and leaves. The sheep berry (otherwise known as nannyberry or sweet viburnum) shows beautiful autumn colors and bears sweet, edible fruit. Another shrub of the viburnam family, highbush cranberry, has been used for its medicinal properties.

The forests in the watershed are varied and are often a result of past land use. The original forests were lost through land clearing for agriculture, potash production, and timber harvest and also from forest fires. After the Civil War, 75% of the land was open. A subsequent decline in agriculture resulted in eventual reforestation. The types of trees that began to grow on this abandoned agricultural land depended on the seed source close at hand, the soil, and elevation. Today, typically you will find spruce and fir dominating the spine of the Green Mountains, mixed hardwood (maple-beech-birch) dominating the middle elevations and a softwood (evergreen) and hardwood mix dominating the lower elevations.

The Winooski River provides a rich habitat for many wildlife species. In spring, summer, and fall you may see sandpipers probing pond and stream edges for prey, or swallows catching insects. Other birds often seen along the river include great blue herons, ring-billed and herring gulls, and goldfinches. Kingfishers may also frequently be seen diving into the river after fish.

Watch for American osprey nests in the snags of large mature trees. With luck, you may see this water-loving, eagle-like hawk plunge feet first for fish.

Where adjacent lands are forested, you are likely to see deer. Moose have also been sighted along the North Branch and other tributaries in the Winooski River Basin. As you canoe down the river, you will probably spot frogs, snakes, turtles, and toads. Species such as muskrats, beavers, water shrews, and otters, all of whom depend on the river for their food, are also frequently seen. Keep an eye out for raccoons, foxes, skunks, fishers and coyotes, who may use the river as their source of water. Floodplains abound in a rich diversity of wildlife. Many species of waterfowl, including Canada geese, mallards, pintails, green-winged teal, blue-winged teal, hooded mergansers, ring-billed gulls, and buffleheads use the wetlands during migrations and some species make the wetlands their year-round home. Along with the mammals already mentioned, there are field mice, gray squirrels, chipmunks, mink, and weasels.

There are several particularly good observation points along the floodplain. Year-round waterfowl can be seen at the island just below Salmon Hole. Migrating waterfowl use the sand knoll north of the Central Vermont Railway track near the McNeil plant. Half Moon Cove is home to the mink, as well as waterfowl and muskrats, who live in the cattail and buttonbush-filled marshes. Many migrating songbirds can be found in the Derway Island floodplain, and the Intervale floodplain, located between Burlington and Colchester, has over 50 nesting bird species.

In addition to the animals normally found along the river, woodchucks, starnosed moles, short-tailed shrews and meadow voles have been found in the Intervale. The garter, milk, water and redbellied snakes are among the reptiles living in this area, and some of the common amphibians include American toads and spring peepers, as well as green, leopard and pickerel frogs.

Most of the streams within the Winooski River watershed contain habitat that supports wild trout populations. The cool, shaded mountain streams provide homes for wild brook trout, Vermont's only native stream trout. Larger tributaries and much of the Winooski River support naturalized populations of wild rainbow and brown trout. Both species were introduced to Vermont in the late 1800's; rainbows from the West Coast and brown trout from Europe. The Dog River has a reputation as one of the best wild rainbow and brown trout streams in the state. In addition to wild populations, "catchable" size trout are stocked in several of the larger tributaries and the main river. Trophy stock can be found in the Waterbury area. Smallmouth bass and walleye can inhabit much of the river downstream of Bolton Falls Dam.

A seasonal migration of fish enters the lower reaches of the Winooski River from Lake Champlain. Large mouth bass and northern pike are common near the mouth, and many of the more than 85 species of fish inhabiting Lake Champlain can be found from time to time. In recent years, significant numbers of lake trout have come into the lower Winooski River in the fall and winter months.

Since 1993, a fish passage facility has operated at Winooski Dam One (below the Winooski Falls in the City of Winooski). Spawning salmon are trapped in the fall and trucked and released to reach spawning areas as far upstream as Bolton Falls Dam.

Aquatic macroinvertebrates (animals without spines, such as crayfish and dragonflies) comprise the largest number of species in Winooski River and its associated lakes. It is likely that over a thousand different aquatic macroinvertebrate species depend on the Winooski River and its tributaries as a home to complete their life cycles. Besides being important as individual species, these animals are functionally important in the aquatic food web, without them the aquatic environment would not be able to support a fishery, or function as an ecosystem. It is the aquatic macroinvertebrates that consume the algae, and plant leaf material at the base of the food web, and in turn are consumed by other invertebrates and fish up the food web so that we can enjoy a fat trout on our dinner plates, and other mammals and birds can do the same.

By far the majority of these animals are Aquatic Insects (a Class of animals) that live in the river as immature larvae or nymphs. These include Anisoptera (Dragonflies and Damselflies), Plecoptera (Stoneflies), Trichoptera (caddis flies), Ephemeroptera (mayflies), Coleoptera (beetles), Hemiptera (waterbus), and Diptera (true flies). Other aquatic macroinvertebrate groups include annelids (worms and leaches), decapods (crayfish), amphipods (sowbugs), isopods (scuds), gastropods (snails), bivalves (fingernail clams and mussels). A number of the mussels found only in the lower portion of the river below the Salmon Hole to Lake Champlain are very rare in Vermont and are among the States Endangered Species. These include animals with names like Pink Heelsplitter, Fragile Papershell, Pocketbook, and Fluted Shell. Another rare mussel called the Eastern Pearlshell is found in association with the colder upper headwaters of the Winooski River in Plainfield and Marshfield. This mussel species is one of the longest lived aquatic animals in the watershed with a life span of up to 75 years.

This section draws considerably from information provided by the Winooski Valley Park District.