For thousands of years, humans made use of the abundant resources afforded by the river: butternuts, fish, birds, and mammals for food; wild plants for food and medicine; and clay, wood, bone, and plant fibers for tools and containers. Paleoindians hunted and lived in the watershed 10,000 years ago. The oldest documented site is in Moretown along the Mad River. The land back then was much like the Arctic tundra. Hunters tracked caribou, wooly mammoths and mastodons. Sometime around 1000 CE, horticulture came to the region, and the Winooski floodplain lands supported Native American crops of corn, beans, and squash.

Around 1400 CE, the Abenaki people cleared trees along the Winooski River in the Intervale near Burlington. There is archeological evidence showing that maize (corn) was being planted at that time. The Abenakis named the river for the wild onions growing along its banks.

Arrival of the Europeans

Samuel de Champlain led the French into the area in 1609. They cut lumber along the Winooski’s banks but did not settle here until 150 years later. During the hostilities between natives and Europeans (1660s to 1790s), raiding parties used the Winooski as a “water highway” to the Connecticut River and to the English colonies to the south. Champlain remarked in his dairy at the extensive cornfields growing at the mouths of rivers on the east side of Lake Champlain, the Winooski River being one of them.

The English victory over the French in 1763 opened northern Vermont to new settlers. The colonies of New York and New Hampshire both claimed what would become Vermont. An enterprising group of Connecticut brothers, the Allens, formed the Onion River Land Company to buy New Hampshire land grants at prices depressed by the controversy. They gained the questionable titles to tens of thousands of acres, then led efforts to resist New York' s authority. Through leases, sales, and contracts with the company, pioneer farmers began improving lots along the Winooski River until the American Revolution induced most of them to flee.

After the Revolutionary War, Ira Allen built sawmills, a forge and a gristmill powered by the Winooski Falls in what is now the City of Winooski. The Allens’ land investments led to the development of Burlington and several other towns along the main branch of the Winooski River and its tributaries. Ethan chose a site downriver to start his own farm with his second wife, Fanny. Neither Ira nor Ethan ever realized the fortune they expected from land investments, but their efforts led to the development of Burlington and many other towns, and ultimately to the separate State of Vermont. 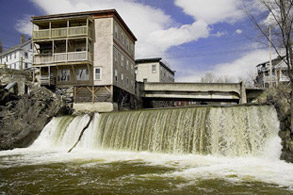 The Winooski River has played a key part in the development of many of the towns and cities on the river, where hydropower from the mills produced basic necessities such as lumber and flour. Subsequent mills, in addition to lumber and flour, produced paper, refined cotton and wool. In the 1880s, many mills started to produce electrical power as a secondary source of income. Eventually many of the mills were converted entirely to hydropower.

The first mills on the Winooski were two saw mills powered by timber crib dams built by Ira Allen in 1786. The two mills and others that were later built in Winooski were periodically flooded. Mills followed in Montpelier, Middlesex and later in Richmond, Bolton and other towns. In 1880, Burlington, then a milling center, was the third most important wholesale lumber market in the United States, importing some 150,000,000 board feet of lumber. The timber industry experienced a decline in the 1800s due to over-harvesting of the forest. This deforestation and subsequent runoff contributed to flooding of the Winooski.

Growth in the emerging textile industry promoted the revitalization and replacement of many existing structures with larger mills capable of greater output. A cotton mill was established in Montpelier in 1810 and a woolen mill opened on the North Branch in 1820. In 1835 the Burlington Mill Company was organized. The success of this new industry was reflected in statistics recorded in 1840: Merino sheep imported from Portugal numbered 1.7 million, a six-to-one ratio over the human population of the state. The Colchester mill, built in 1888 and the third in the Woolen Mill complex, manufactured cotton and merino hosiery yarns and now houses the Woolen Mill Apartments. The Champlain Mill was built in 1912 and produced worsted dress goods and is now a revitalized shopping mall. Many of the original mills on the river were destroyed by fires and floods. 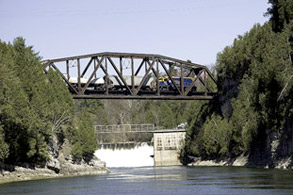 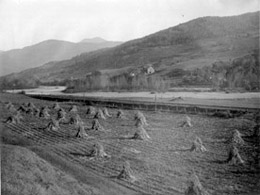 Prior to the Civil War, merino sheep grazed the hillsides and streambanks. The watershed was only 20% forested. Towards the end of the 19th century, the Winooski River Valley became a large producer and exporter of butter and cheese for the Boston market. In the 1920s the dairy industry moved to fluid milk production. In 1929, Chittenden County had 19 milk plants and 15 cream plants. Today there are five milk plants in the entire watershed.

Compared with the mid 20th century, the number of farms has decreased dramatically. Based on the Vermont Department of Agriculture Census the amount of land devoted to agriculture (excluding farm woods) has dropped from approximately 45% in 1950 to 12% in 1997. In 1950, there were approximately 41,000 milk cows in the watershed compared to approximately 12,500 in 1997. The number of horses also dropped from 3,800 to 1,656 over the same time period. These changes have happened concurrent with an increase in residential home development and the conversion of farmland to forest.

Even though the number of dairy farms and cows has decreased in the watershed, the amount of milk produced has increased statewide by 43% since 1950. There is also an emphasis on different types of farm products. Fruit, vegetable, and beef and sheep farms have replaced the pork and poultry operations of the 1950's.

In the early 1800s, plans were drawn up for the “Onion River Navigation and Tow Path Company” to build a 100-mile canal from Lake Champlain to the Connecticut River. Plans were abandoned with the coming of the railroad. After the Civil War, the railroads came and travel on waterways declined.

Today, travel is on highways, not rivers. Over time, our population has distanced itself from the early connection with the rivers and streams of our watershed. It is easy to forget that most of the sites for towns and cities were chosen because they were on waterways. 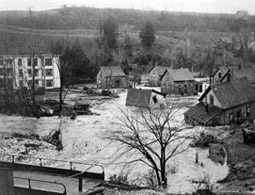 While the Winooski River has always yielded a multitude of benefits, including transportation, food source and power, to those living along its banks, the river' s potential to flood has often taken its toll. Since 1973, Vermont has suffered more than a dozen major floods; the majority of these have had impacts in the Winooski River watershed. In the flood of November 1927, Vermont's worst recorded flood to date, 55 died and $13,500,000 in property was lost. The loss of life and property during this event was greater than any other water course in New England. The flood of March 1992 caused more than two million dollars in damages in Montpelier. Floods throughout Vermont in the spring of 2011 and following Tropical Storm Irene in August 2011 rivaled the 1927 flood, with more than ten million dollars of damage to homes, businesses, and infrastructure. Flooding continues to be a major concern and has been exacerbated by building and encroaching on floodplains. Examples of human impact on river floodplains can be seen in the following video.