Check our Flickr gallery for photos and videos of the active removal!

Friends of the Winooski River is managing the project of removal of the Camp Wihakowi Dam from Bull Run in Northfield, Vermont. Engineering oversight on the project is provided by Milone & MacBroom, Inc, with Jessica Louisos serving as project lead engineer. Excavation services are provided by Hilltop Construction, Inc, Kolbey Haupt, principal. FluidState’s primary point of contact for this Scope of Work will be Michele Braun, Executive Director of Friends of the Winooski River. Site access will be provided and directed by Milone & MacBroom, Inc., at the will and discretion of Kolbey Haupt.

The Camp Wihakowi Dam (ID# 143.08) creates an impoundment and a barrier to aquatic organism passage on Bull Run in Northfield. The dam was built circa 1920 to create a large pond for a youth summer camp. A small portion of the dam was breached in the late 20th century, but the dam continues to hold nearly 100 years’ worth of accumulated sediment behind it.

Failure of the dam is inevitable, as the owners, Lisa and Jonathan Burr, do not intend to rebuild it. They operate a lodging and dining business on the property, and maintain a public hiking trail to the cascades. The dam failure may be a gradual process, or a sudden failure could occur during a high-flow event. In either case, the impounded sediment will be released downstream and make its way to Lake Champlain. A sudden release would destabilize downstream reaches, and have a significant negative impact on habitat and biota.

Bull Run rises in Roxbury and flows north into the Dog River in Northfield. The total watershed area of Bull Run is approximately 9.3 square miles, with 8.6 square miles above the Camp Wihakowi Dam. Bull Run contains abundant brook trout upstream and downstream of the Camp Wihakowi Dam, and it is a B1 water for fishing. Removing the Camp Wihakowi Dam would restore fish passage to at least 6.3 miles of main stem river (third order or larger), as well as many more miles in smaller tributaries. It would allow native trout to access miles of upstream habitat that will be critical for providing cold water refuge as temperatures rise.

The partial breach of the dam notwithstanding, the dam continues to disrupt downstream sediment transport, resulting in upstream sediment accumulation and downstream scour. During Tropical Storm Irene, and other recent large storms, the dam is reported to have exacerbated upstream flooding, which caused severe erosional damage to land and infrastructure. Removal of the dam, which is located at the head of a bedrock reach, would restore stream equilibrium and reduce downstream erosion.

Friends of the Winooski River (FWR) is working to remove the Camp Wihakowi Dam. Goals of the removal project include minimizing environmental impacts, and taking measures to restore natural stream processes. Accomplishments, as noted above, include floodplain restoration and improved aquatic and terrestrial habitat.

Northfield Historical Society has shared a few photos of the original reservoir: 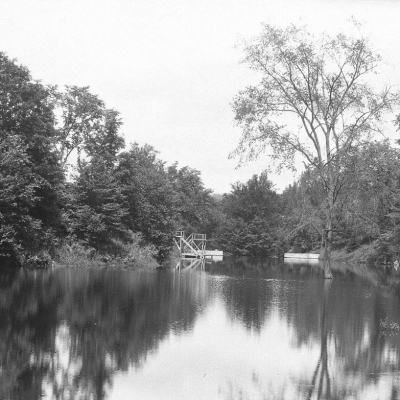 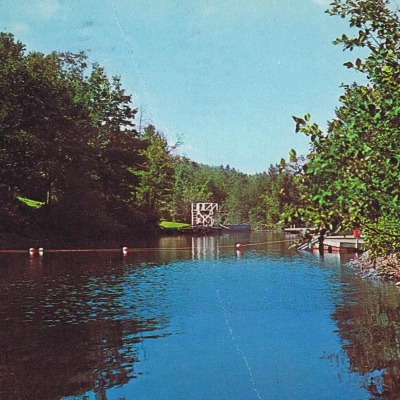 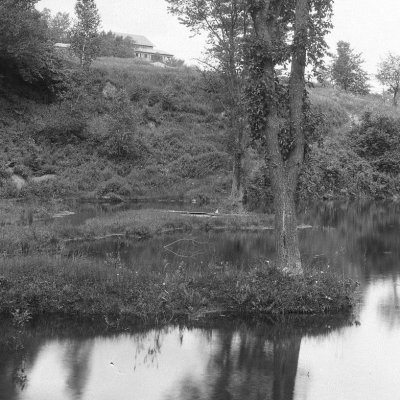